10.000 lesbians in the streets of Paris on April 25th to reclaim Assisted Reproductive Technology and visibility.

By Manon Fontaine for the EL*C

The day before Lesbian Visibility Day 26 April marked the success of a spectacular Dyke March in the French capital, Paris. 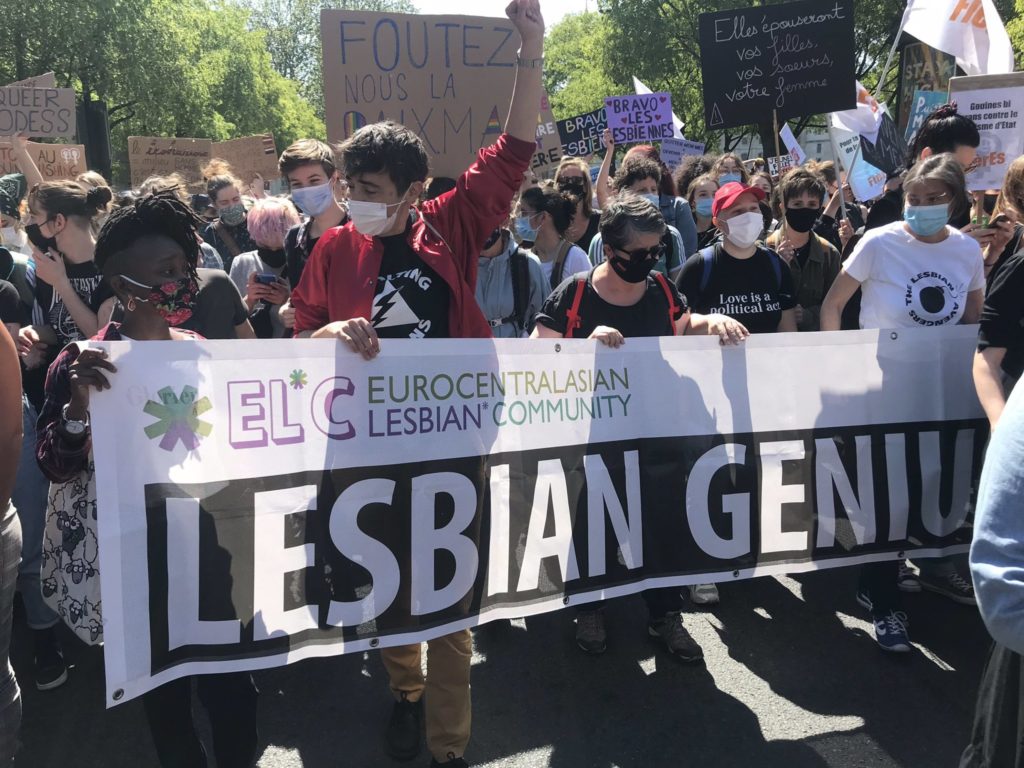 41 years after the first French lesbian march, the organisers of Lesbian Collages successfully brought together 10,000 lesbians in the streets of Paris to support the right to Assisted reproductive technology (“ART”) for all. The aim of this demonstration was to make legal demands to the French state, but also to make the lesbian community visible on the model of the Dyke Marches that have been held all around the world for decades.

Demands of the organisers and participants
This year, the main demand of the march was for an IVF law for all that really corresponds to the needs of the LGBTI community. As is often the case, lesbians spearheaded a cause that concerns all members of the community, highlighting notably the transphobic and racist provisions of the LREM bill that was finally rejected by the Senate in February 2021.

Thus, lesbians have expressed their requirements for the future law in various communiqués, speeches and slogans. According to them, a satisfying law would include: anonymous ART by default, free and reimbursed for all, without conditions; to be able to give one’s ovocytes to one’s partner (sharing the IVF (in vitro fertilisation) procedure between the two mothers, as in Belgium); have the right to refuse the match (there is currently a necessity to have a donor with physical characteristics close to the applicants); an appropriate communication effort on gamete donation by public health actors to fill the current gap for people of colour.

Firstly, the demonstrators are calling for the abolition of the heteronormative regime and associated privileges by demanding equal conditions in accessing ART and the right to found a family. Marlène Ducasse, who is member of Lesbian Collages and organiser of the march, shared the difference in treatment between heterosexual and lesbian couples in the light of the draft law:

“For example, the current bill includes that lesbian couples who want to have their child recognised will have to go through a notary and therefore pay, which straight couples do not do today when they have access to ART.”

Indeed, ART in France has been legal and free for heterosexual couples since 1994. With this demonstration, lesbians want to point out the legal discriminations / barriers between lesbians and heterosexuals, but also the social and cultural impacts that these have on their lives and families.

Lesbians have always been able to have children despite unequal laws, but the important thing is also to change mentalities about parenthood and lesbian families. Thus, lesbian mothers who have had to use indirect means such as going abroad to benefit from ART express the discomfort they feel in France because of the illegality of these practices.

Lisa, a lesbian activist and mom of a 2 and a half year old son born through ART, explains the double legal and social difficulty of the process she had to go through. She explains that she had to travel to Belgium to access ART, where it is legal for same-sex couples since 2007. “We were quite lucky because it worked the first time. We spent 1,000 euros in total, the costs increase especially when you have to go back several times, and go for IVF”.

Like Lisa, 2.400 French women every year are reported to have undergone ART abroad in Spain and Belgium only, according to a survey conducted by the media outlet La Croix in January 2020. However, the costs can quickly rise to around 10,000 euros. France, which is a country well-known for its social security provisions, could provide this medical procedure for free to 3,000 to 7,000 additional requests if the law was extended to single women and lesbian couples.

Furthermore, legalizing ART for all could also prevent numerous other difficulties that deeply affect numerous maternity projects in France from happening. Indeed, many legal obstacles stand in the way of these women, whether they choose to undergo ART abroad or to circumvent the law in France through risky and expensive procedures.

However, Silvia Casalino, the co-founder and co-director of the Eurocentralasian Lesbian Community (EL*C), explains that the fight for ART for all is far from having only a legal scope. She compares the fight for ART to the fight for marriage for all which took place in France in 2012:

“By entering the fight head on, it gives gays, lesbians and trans people a lot of visibility, at a time when trans issues were not discussed at all, for example. I think that politically the ART is a bit the same thing: even if you’re not personally interested in having children, it’s a political instrument, an extremely important political revelator that it’s interesting to use to unlock other things.”

Making lesbians visible, a necessity
Indeed, lesbian mobilizations around subjects like ART also allow the community to draw attention to its existence and specificities. The repertoire of actions currently used in France is varied and visible, ranging from collages to lesbian marches, while lesbians are also managing to gain visibility in the media thanks to lesbian celebrities such as Alice Coffin or Adèle Haenel. The strategy of visible lesbians is thus deployed in both the cultural and activist fields.

According to Silvia Casalino, visibility in the media is one of the major issues for lesbians today. Indeed, the stake of occupying media space is a major one, and opponents like “La Manif pour Tous” have understood this. It is particularly vital for lesbians to fight back, especially in a context where lesbian activists are not taken seriously:

“In France, journalists consider activists to be biased, so they are not interviewed as experts or taken into consideration: they are automatically discredited.” This way, appearing prominently in the media through events such as the Dyke March is essential to bring about both legal and societal changes, having a direct impact on public opinion. 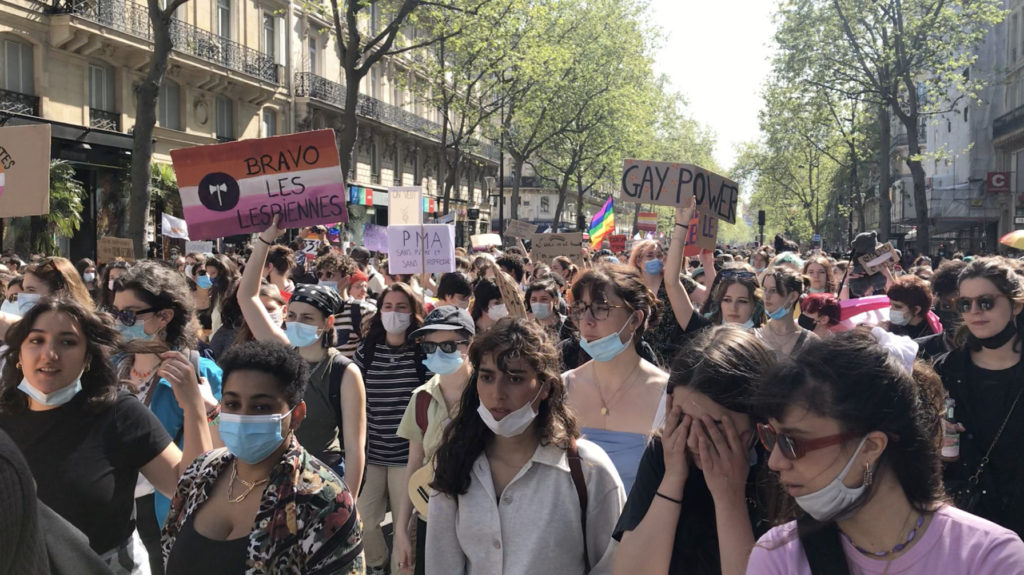 The legacy of the second wave feminists and the Dyke Marches
To gain visibility, lesbians have realised that they need to rely on media-friendly and highly visual actions, as shown by the development of lesbian collages since December 2020. They use them in part to raise awareness and express themselves on issues like ART with slogans insisting on the fact that they do not need a father figure to raise children.

Furthermore, many actions and claims used in the lesbian struggle are deeply rooted in the legacy of second-wave feminists, who are notably at the origin of the first lesbian march in France, organised in June 1980 by the lesbians of Jussieu. Indeed, Marlène (member of Lesbian Collages) describes their impact on the current movement:

“It’s a bit of folklore because the contexts are completely different, but we reused a lot of visuals and we said publicly that it gave us the inspiration to do a specifically lesbian march. If the 1980’s march hadn’t happened I don’t know if we would have come up with the idea so easily.”

The idea of these feminists, who were mostly lesbians, also inspired many of the slogans sung or written on placards at this last Dyke March. Thus, many slogans such as “adopt an ethical lifestyle with political homosexuality” or “feminism is theory, lesbianism is practice” explicitly refer to the pioneers of political lesbian activism.

At the same time, it was this type of slogan in particular that provoked the strongest reactions from lesbophobes, both after the images of the march were broadcasted in the media and during the organisation of the march. In both cases, the organisers and lesbians in general were indeed victims of cyberharassment.

“The day after the march was announced, messages began to appear accusing us of transphobia and biphobia. […] There is a lot of progress to be made in the way lesbian organising is perceived: it is enough to say that we are organising, that we are lesbians and that we want to do a march for people to come and resent us with a lot of contempt.”

These criticisms have also been taken up by French cultural figures such as Raphaël Enthoven, or far-right websites such as Fdesouche (1), according to Marlène. This particularly affected French activists, including after the march and the posting of photos on Twitter: for example, the lesbian political figure Alice Coffin was forced to deactivate her account to escape cyberbullying, revealing once again the unconcealed lesbophobic atmosphere in France.

Nevertheless, in general, the lesbian march on 25 April seems to augur well for lesbian mobilisation in France. Marlène is pleased with its success and is already thinking about its long-term role:
“For me, this march is a victory in the sense that we expected to be 500 people and in the end […] we succeeded in making numbers and in bringing together 8,000 people in the streets of Paris outside Pride on issues specific to the lesbian community.

This march showed us that lesbians are capable of organising and mobilising: it’s an open door. We must take inspiration from this march to continue to organise new actions for the lesbian community.”