EL*C Statement on Solidarity with Trans and Gender-diverse Communities

Since its inception, EL*C has been striving to create a space and contribute to a community that is inclusive and encompasses the diversity of identities and experiences under the lesbian* umbrella. As stated in our internal guidance on inclusion and diversity, “the diverse lesbian and trans communities are strong allies” and while this is true in many contexts, there are continued “attempts to erase the historical legacy of mutual alliance and support’’. Many of our trans and non-binary siblings have traditionally socialized within the lesbian* communities, finding support and voice in these extended families and participating in the collective struggle against the cis-hetero-patriarchal system and capitalist oppression and indeed trans and gender-diverse persons in the EL*C board and membership represent an integral part of EL*C’s organizational identity. Diversity is inherent and natural to our communities and “efforts to exclude trans women and non-binary people from lesbian and feminist communities are ahistorical, morally wrong, and go against the founding values of those movements’’ as is eloquently put in a 2022 statement from the U.S.-based National Center for Transgender Equality. 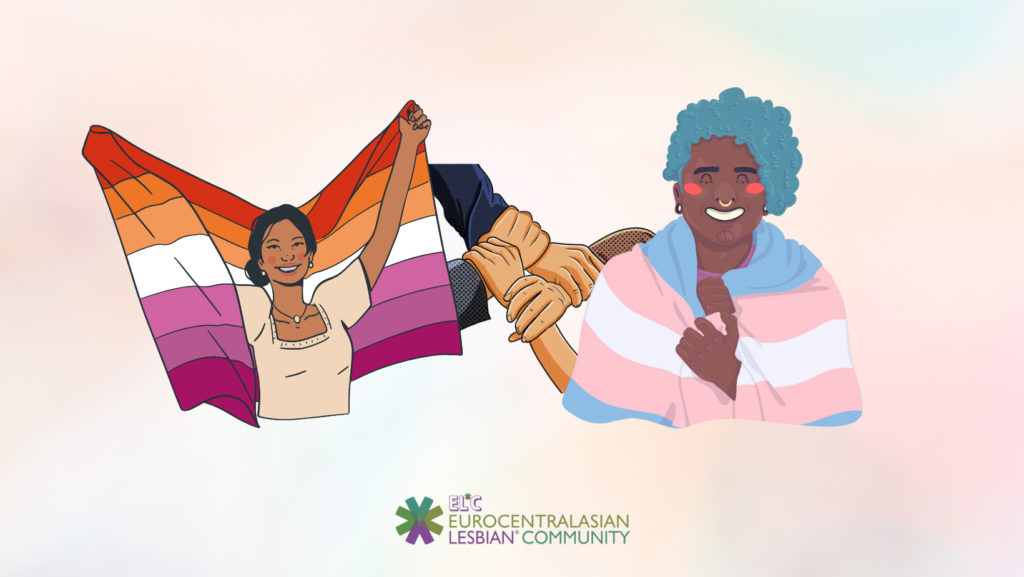 However, the exclusionary efforts mentioned above have been gaining traction. We live in a climate where many famous public figures such as writers, politicians, self-proclaimed feminists, academics and journalists feel entitled to use their platforms to amplify the unfounded and unscientific transphobic claims simply aimed at pitting trans and non-binary people against cis women (including cis lesbians). This tendency has been seeping into some of the feminist and LGBT/QI activist circles, further undermining the safety and well-being of our trans and gender diverse siblings.

The vitriol present in the public debate (which predominantly excludes trans and non-binary voices and their perspective) has very real consequences in form of delayed reforms or adoption of outright oppressive legislation, decreased availability of resources in the area of gender-affirming care and relevant medical and psycho-social support systems. In the United States alone at least 25 bills in state legislatures were passed in 2022 targeting trans people. Across Europe and Central Asia, trans-exclusionary groups, often situated within broader anti-gender movements, contribute to both regressive policies and the slowing down of positive social change. Between 2020-2022, UK, Spain, Germany and Sweden have refused to propose and/or pass legal gender recognition legislation based on self-determination. The pathologization of trans identities continues for instance in Kazakhstan as well as in Czechia where in 2022 a court ruled to uphold the forced sterilization requirement for legal gender recognition.  Moreover, in recent years Hungary and Kyrgyzstan removed the possibility to obtain legal gender recognition at all, while Kazakhstan in 2020 raised the age threshold for requesting gender affirming care and legal gender recognition from 18 to 21. All of this is happening in the context of publicly expressed transphobia, transmisogyny, and an infected debate against a community that already suffers from disproportionate exposure to violence, discrimination and socio-economic exclusion. This violence is too often fatal. In 2021-2022 alone, TGEU and International Trans Day of Remembrance report 327 murders of trans and gender diverse persons globally. According to a Fundamental Rights Association (FRA) survey from 2020, 46% of trans respondents in Europe reported difficulty in making ends meet, with 54% of trans women pointing to financial difficulties. An additional implication of the conditions that trans and gender diverse people find themselves in lies in the reduced average life expectancy, which, for instance, is 35 for trans people in Latin America and the Caribbean, according to RedLacTrans.

Conservative politicians rapidly latch onto transphobic rhetoric and start questioning the ’’effects’’ of trans identities and experiences on others, while proceeding to pen repressive bills in order to boost their political agenda. Thus, it is clear that while parts of the trans-exclusionary rhetoric have its origins within segments of feminist movements, it serves the same anti-gender groups that work to ban abortion, limit access to other sexual and reproductive rights and keep gay, bi and lesbian people outside of the family rights framework. The same people who actively used to claim (and sometimes still do) to protect children from the influence of gays and lesbians, now come out against “the dangers” of the “rapid-onset” gender-diversity. Unsurprisingly, instead of protecting they cause suffering and desperation. TGEU affirms that “[m]any trans children and youth face family rejection and violence due to their trans identity, and may be thrown out of the family homes, pushed into housing insecurity or homelessness. Family and societal rejection also result in many trans young people suffering from mental health problems, anxiety, depression, loneliness, low self-esteem, and thoughts of suicide. All these factors can lead to trans youth struggling in school, which can increase their chance of financial insecurity in the future.”

Under the pretext of protecting traditions, conservative forces  are policing the lives and behaviors of numerous vulnerable communities to keep them in subservient silence and poverty. These forces aim to maintain power through division. The 2021 report by the UN Independent Expert on SOGI identified that the lines between broader anti-gender and specific anti-trans narratives is becoming increasingly blurred, given that “by normalizing the false idea of a monolithic religio-cultural identity, and frequently entrenching a climate of fear within public discourse, rhetoric linked to sovereignty and patriarchal and absolutist interpretations of culture and religion are reinforced to achieve political, social and/or economic power”.

As lesbians* we at EL*C clearly understand that denying or questioning the legitimacy of identities and experiences of our fellow trans and non-binary community members, is part of the same structures that deny the legitimacy of gender expressions of many cis lesbians. For instance, the UN Independent Expert on SOGI observes (reiterating the observation of the CEDAW Committee) that “women who do not conform to gender stereotypes, including LBT women, are particularly vulnerable to discrimination, violence and criminalization”. Both femme and butch lesbians, for example, have been historically demonized and perceived as a mimicry of heterosexuality, by the same strands of feminism, that are often situated in the modern-day trans exclusionary discourse. According to Jack Halberstam “[t]he rejection of butch as a repulsive stereotype by some lesbian feminists also had the unfortunate effect of pathologizing the only visible signifier of queer dyke desire…” at the same time as the rejection of femme gender expressions further continued to perpetuate misogyny. Both Jack Halberstam in 1998 and Finn McKay in 2021 speak about trans people and gender non-conforming lesbians having their gender expressions policed in public toilets. For many of us in the trans and lesbian communities public bathrooms have for decades symbolized and represented “a limit to [our] ability to move in the public space” (Halberstam, 1998 p.23). This type of policing has often been perpetrated more specifically in the lesbian circles towards gender non-conforming lesbians whose gender expression and/or sexual experiences and practices did not fit the accepted identity norms.

While we as a lesbian* community have partially moved away from the narrow understanding of gender and sexuality, our trans and non-binary siblings continue to face discrimination. Their identities are being questioned and vilified both by the anti-gender movements and by parts of their own feminist and queer communities. At the EL*C we do not accept this discrimination and commit to opposing it within our organization and the spaces we occupy.

We are committed to continuously learning and discussing the multitude of ways in which existing power structures in society affect all women and gender diverse persons. As Finn McKay puts it this “includes the intersections of racism, class oppression, homophobia, failure to accommodate illness and disability or cater to caring responsibilities…” While our trans and non-binary siblings may be primarily targeted because of their gender identities and expressions, these experiences of violence and discrimination are severely compounded when trans and non-binary individuals in question carry an extra layer of exclusion such as being black, people of color, indigenous, refugees, disabled or poor. The racial and class aspects of transphobic attacks represent a systemic issue that goes back to the colonial practices of submission and oppression. This needs to be addressed when analyzing the root causes of transphobia, if we aspire to achieve a meaningful change for all.

We acknowledge that EL*C still has substantial space for improvement and growth in the area of understanding and building better solidarity with trans and gender-diverse lesbians*. We agree that “unity is fragile and has to be continually produced…” (McKay, 2021) both internally as well as in how EL*C is perceived from the outside. For this reason, rather than turning a blind eye to existing tensions, we commit to: