Homophobic presidential campaign in Poland: “They choose scape goats. In 2015 it was the refugees. Now focus is on LGBTI” Interview with Polish activist, Magdalena Swider. 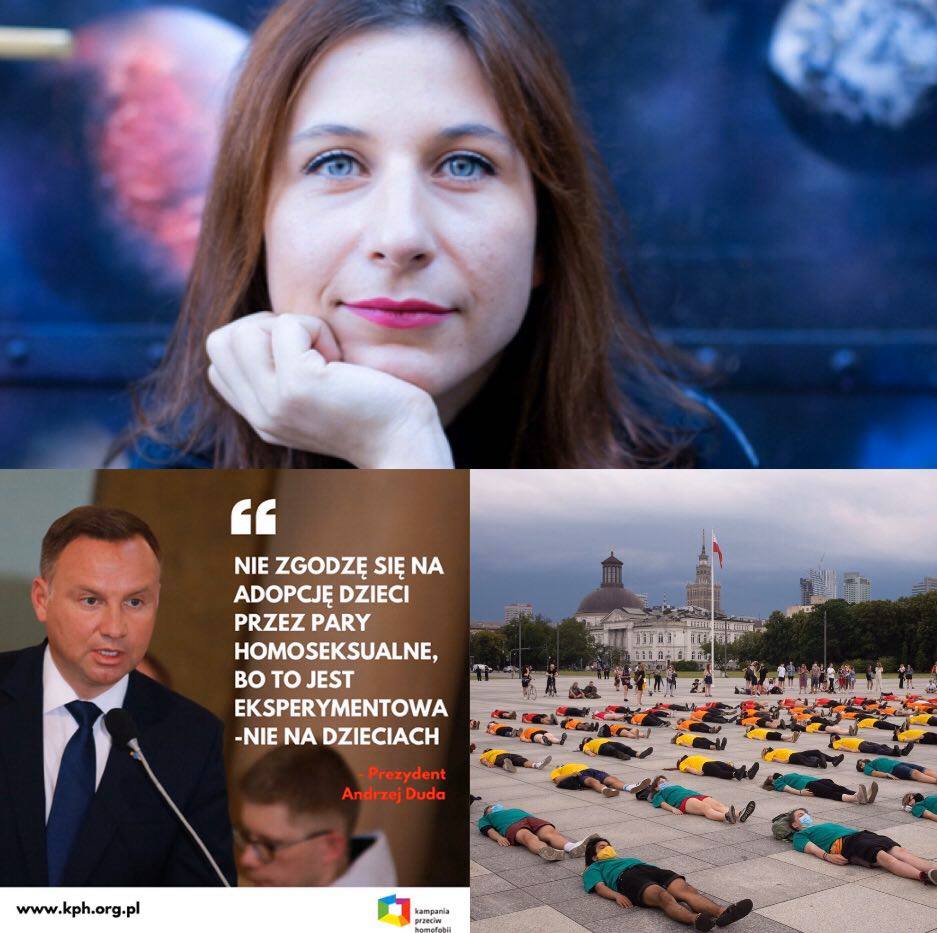 Top: Magdalena Swider.
Bottom left: flyer from KPH. Translation: I will not agree to the adoption of children by homosexual couples because it is an experiment on children.
Bottom right: silent protest organized on June 27. Picture by Karol Grygoruk. From KPH Facebook Page.

Magdalena Swider is the Program coordinator of KPH (Kampania Przeciw Homofobii /Campaign Against Homophobia), leading polish LGBT NGO. We wanted to interview this queer activist and specialist of hate crimes, because for months now, LGBT people have been the target of hate speeches from Andrzej Duda, former president now running for reelection in Poland.

So  Alice Coffin, journalist and team member of EL*C interviewed her on July 1st. Since then, as July 12, final election day is getting closer, other attacks have again been voiced against LGBTI people.

Magdalena Swider tells us how KPH and other activists are organising their resistance in the midst of this terrible political campaign which could also be a turning point if Andrzej Duda is defeated by his opponent Rafal Trzaskowski, mayor of Warsaw.

For weeks, LGBT people have been at the center of the presidential campaign. Why do you think Duda made this choice of targeting LGBTs?

The president, the Law and Justice Party, they choose scape goats. In the 2015 campaign it was the refugees. For the last two years and European and Parliamentary, and now the presidential elections, focus is on LGBTIs. But for this election, we have reached one other level. Before, they were talking about LGBT people as a threat to Polish values. Now they focus on a strategy of dehumanization, they are saying LGBTI persons are not people, but an ideology.

The focus on both migrants, refugees, and LGBTIs is witnessed in other parts of Europe. Or, in other European countries there is also a specific racist target against Muslims. How do those strategies of crystallizing on some minorities interconnect?

We learnt a lot from the activists who were fighting the hate campaigns against refugees. What we both try to do is show the connections between public speeches of politicians and attacks in the streets. For example, one organization did a research showing that every time a politician voices hate speech, more hate crimes happen. About the attacks against LGBTI people, every four years we do a big research. We are about to publish the new ones, and it will be very interesting (and frightening) to compare the numbers with the previous ones and how the rise of homophobic hate speech has consequences on mental health of the LGBT community and the rise of violence – how you get attacked in the street, whether it is  by football fans or nationalists, for wearing a rainbow bag.

What is the role of KPH during the election? Do you give voting instructions?

No. Well, usually not at all. But with Duda it is a little different. This time we are saying « end the homophobic presidency » and we also encourage our community to go and vote. The participation rates in the first row have never been as high since 1989. This is connected.We are expecting lots of hate speech to come out this week, so we got ready on monitoring Duda’s campaign. We also organise events such as silent protests.

Are you supported by the population?

We did not start those protests ourselves. People were starting them spontaneously. The world of acadomia reacted with at least 20 universities issuing a statement against hate speech. Also not only did a lot of people go to vote, but they sometimes went wearing rainbow socks or other kinds of outfits to show why they were going to vote.

It seems the political strategy of targeting the LGBTI people did not work that well this time. How do you analyse this?

Circumstances were different because of Covid-19. It changed different things. First, usually for their campaigns, politicians do researches, with focus groups, and adjust their strategy like marketing. But I think they did not do it this time –  they just went for the easy strategy and targeted LGBTI people but voters did not buy it. They were too frustrated and furious to believe it so much. And this is precisely also because of the virus. There was a lot of money  spent on equipment that did not reach people, the minister of health was heavily criticized, lots of people lost their jobs so there was anger. And blaming the LGBT community was not believable.

Did the virus also affect your organization?

Yes because it was very tricky to make our position. When Law and Justice and Duda who were very popular before the corona virus  decided they wanted to maintain the election despite the fact that everything was shut down, we did not know if the elections will be organized in the first term or whether it will be postponed. Whether  we should boycott the election or go anyway and get our health at risk. Finally, they decided to postpone the election.

Yes, the choice for strategy of activists are very tough to make during corona virus time. How are you keeping up between this and the tough campaign?

The bright side is, I have been working as an activist for nine years, and I have never seen much of what could be called a community. But because of this backlash, people are starting to come out more. A volunteer explained to me that she was at her workplace , and her colleagues were having a discussion about the Rainbow Friday action we organize at schools, and she could not stand what she was hearing. So she came out. This is a positive trend.

How do the media behave during this campaign?

The nation public tv is completely with Law and Justice and advise people to go and vote for Duda. They have breached every ethical stand. They never behave as journalists with us. They never approach us to ask questions. They just come to our office with their camera, when they want to point at us. And they never either ask for people from academia to comment the news. Their so called talking experts are right wing publicists. Those media are really using the same language as the fundamentalists groups. .They explain that lgbt want to teach four year olds to masturbate…Not to mention that this channel, the public tv, sent a fake volunteer to our association.

Yes, TVP1 made this thirty minutes documentary called « Invasion » and broadcasted on TVP1. They infiltrated our organisation via a fake volunteer. I am featuring in this documentary and I was very angry about this. They recorded some of our volunteers who are not out at all. And they broadcasted this last fall, two days before the elections, during prime time between a presidential speech and a very important football game so there were so many people watching.

When the European Lesbian Conference gathered in Ukraine, in April 2019, there were protests every day in front of the conference, in Kyiv. And it seems like they were protesting as much against the word « European » as the word « lesbian ». Is the fight against LGBTIs in Poland also a fight against Europe or is this as this article puts it a wrong way of looking at things?

For sure, there is a huge rhetoric about how the lgbt movement is all about western countries trend coming to destroy our values. And they keep using examples of Germany or The Netherlands as places which have turned bad because of same-sex mariages. However I think the European institutions should be careful about not to link the attribution of structural funds to Poland to the way the country treats LGBTI people. Because then it looks like it is because of LGBTs that money is taking away. The strategies are very difficult to elaborate, and we are working on it quite a lot with ILGA Europe.

What can activists do in Europe do to help you?

First, press their politicians to actually react to what is going on. Second, come to our Pride marches. When people from other countries come to our March, it makes them safer.

We will do our best with EL*C to come and march with you as soon as possible. By the way, is are there any specificities of how lesbians are targeted or reacting during those times?

Well when it comes to activists the community is coming together and I don’t see lesbians very different than gays. Everyone is suffering from the resolutions taken in LGBT free zones. But I think when it comes to constitutional symbols or measures, like the one on mariages or adoptions, then it impacts more women, single mothers, lesbians. Because more of them have rainbow families.