“I am a journalist. I am a lesbian” Russian Journalists talk about media coverage of LGBTI issues. 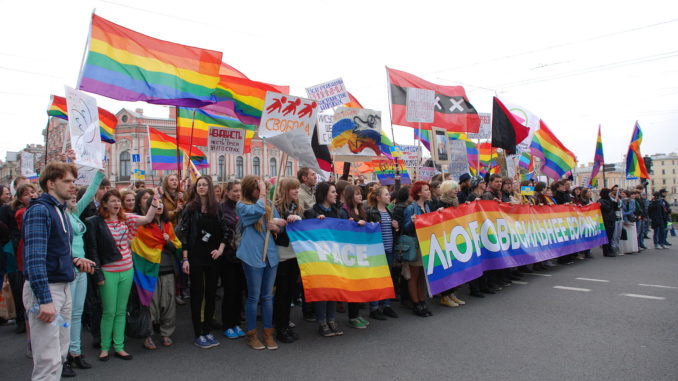 Russian journalist and out lesbian, Elena Dogadina writes about her orientation and LGBTI issues. She covers violence and discrimination in her country. Editor, trainer and human rights defender Temur Kobalia is the founder of NCO TV Russia and the Volgograd Human Rights Council. In the framework of a press tour organised by the International Federation for Human Rights (FIDH), the French LGBTI Journalists Association (AJL) met with the two Russian journalists. Following our partnership with AJL, we here produce a translation of this interview which was previously published in French.

What are the working conditions for journalists in Russia?

Elena Dogina: To put it simply, the media in Russia are divided into two categories: state-owned and independent media. Working for the latter one, I have more freedom to cover the stories I want to report, especially LGBT related stories. However, these media have much less impact. For instance, my parents who live in a small village are not affected .

Temur Kobalia: There are many laws that limit freedom of the press. The law prohibiting LGBT propaganda, for one, impacted directly on the treatment of these subjects. Another law requires employees of NGOs receiving funding from abroad to register as foreign agents or another one forces any blogger with more than 3000 daily readers to register his personal information with the government. However, this does not mean that we are dictated what to write! Once I get home, I shall write about these meetings that are currently taking place in France and these articles will be read by, on average, 4500 people.

ED : We can’t make the slightest concession. Otherwise, they will impose others on us and we will  become the Kremlin’s official media!

Are you scared for your safety?

ED: I am privileged enough to belong to the middle class. My wife owns her own apartment and we live in an area where I never experienced homophobia. So, no, I am not scared for my own safety. On the other hand, I am scared for the safety of those close to me: for my wife, who is not out publicly, and for my little sister, who could be bullied (a problem that is not taken into account at all by Russian institutions) or discrimination…

TK: I have been arrested before, searched, my passport has once been taken away and my organisation has had to pay a fine equivalent to 15,000 euros. One of my colleagues is under investigation… But that doesn’t stop us from doing our work.

ED: . We don’t know when, we don’t know which of our articles shall be the pretend reason, but we know that we risk an arrest… We learn to live with it: we can’t be afraid 7/7, 24/24. Personally, I am much less afraid since I am out as a lesbian: the threat of  outing no longer exists and I am no longer afraid of being rejected for who I am…

What is your view on how the media cover LGBTI issues?

ED: I am a journalist. I am a lesbian. Even though it is very important to talk about persecution in order to raise awareness, I think it is also very important to write about other aspects that are more positive for the community such as LGBT friendly events. It is necessary to write about all aspects of LGBT life, to interview as many people as possible, to get a better representation, a better visibility. It might inspire more people to come out.

TK : We face a lot of difficulties finding interviewees. Because they get scared or because they want to be paid, many of them don’t want to appear on activist shows. I regret this lack of involvement on their part. They are thus complicit in the government’s actions when they should be standing up to them!

ED: These are the words of a straight man! You cannot blame people for being afraid of reprisals!

TK : I wasn’t talking about people who are afraid but, for example, youtubers who talk about it openly but don’t want to come to our studio because they want to be paid.

How do you perceive the coverage of these issues by the media abroad?

ED: First of all, I have to say that I was astound at how little LGBT people are portrayed in the French media when your society is supposed to be more tolerant! To answer your question, I would say that, even if it unfortunately has very little impact (a constant huge part of the Russian population does not speak English and does not have access to the Internet), the coverage of LGBT stories in Russia by foreign media is important. On the one hand, it provides support to those who feel isolated and, on the other hand, it reminds the Russian authorities, who tend to forget, that they are part of the international community. Foreign media often focus on high-profile cases and thus force the authorities to react. That is very good. However, they should also see the many different stories to meet other people, other aspects that are also very interesting. Basically, let them deal with Russian LGBT issues as they deal with these issues at home.

[Many thanks to Elnara Mevolhon, interpreter, without whom this interview could not have taken place.]

Interviewed by Dimitri Jean and Sebastien Sass for the AJL.

Translated  by Alice Coffin with the help of www.DeepL.com/Translator (free version)