«Lesbian Mothers and the Serbian government» by Lepa Mladjenovic

EL*C has been following closely the lesbian Serbian news lately. As the lesbian Prime Minister Ana Brnabic and her partner were expecting a child, our Strategy Dykerector Dragana Todorovic gave several interviews to the media to explain how very peculiar this situation was.

The child is now born and this birth led to the burst of lesbophobic comments. One of the opposition leaders even said «The children are hungry in this country and the son of the Prime ministre can feed on four boobs». Lepa Mladjenovic, a legend of lesbian activism, sent us  a text to react to this news. Her words on the situation of lesbian mothers and the lesbophobia in Serbia are very powerful. We thank her very much for sharing this with all of you, and wish you all a great reading. 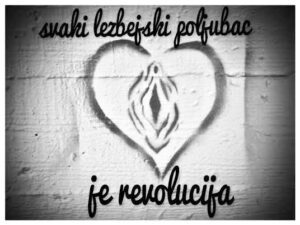 «Every lesbian kiss is a revolution»
Some days ago one morning I woke up to the news on all the front pages – the Office of the Prime Minister of Serbia announces birth of a healthy baby boy of the (woman) partner of the Prime Minister Ana Brnabić. Brief two lines, no comments. Great, I thought, what a mess!I have heard rumors about pregnancy few months ago, but it could have passed as a Balkan joke. Now it’s a historical fact, nothing of a joke. Lets see what followed this extraordinary news.

The partner of the Prime Minister, herself a medical doctor employed in the Clinical Centre of Serbia in Belgrade became pregnant through artificial insemination, we were told, for which there is not yet legal right to obtain in Serbia. Further, not only that there is no legal way the Prime Minister of Serbia can be connected to the baby of her partner but there is not even the decision to put a draft of the same-sex partnership law on the government agenda, even though the activists of the Lesbian non-governmental organization Labris have drafted a law in 2010 and lobbied the parliament in 2014 with a campaign Love is a law. We must also understand the political context: the totalitarian leader, the president of Serbia, Aleksandar Vučić has chosen Ana Brnabić on this post himself, she is not elected nor voted for, and all she has to do is to repeat and participate in the leading nationalist, corrupted party program – which we feminists and most of lesbians oppose. So, Ana Brnabić put herself in a contradictory position in which she cannot lobby for the lesbian, gay and trans rights unless she gets permission from a ‘dictator‘ – the permission she did not get. In this context of power impasse the Prime Minister did the courageous act of her partner having a baby. What followed is that most of the LGBT community has immediately taken her accountable for the legal situation she cannot help herself, nor us, nor the newborn. Therefore, most of the feminists and LGBT community is angry at her for not using her political power to promote the basic legal rights for the same sex partnership and the right to parenthood. More so some of them are extra angry that she has a class privilege to have a baby in a legal vacuum, which many lesbians cannot, mostly because it is very expensive and because they fear for their children’s future in intense lesbophobic society.

This totally new situation lesbian mothers with a baby & the Serbian government made opposition leaders angry, so their anger on the government for the permanent corruption and politics of deceiving, for the total control of media and of all state institutions, for the poverty in the country, for nationalism, authoritarianism, and many other issues – they express through lesbophobic and mysoginic accusation on the Prime Minister herself and her lesbian family, calling her different names, like satanic creature, asking is she a daddy, humiliating her through jokes about stork delivered baby, about who’s going to do her work while she is on the inexistent parental leave, and many others like: In this country the children are hungry and the baby of Ana Brnabić is on four boobs! Social media is full of polemics.

To picture the chaos at the moment we have to say that the leading party of Serbia, which we feminists oppose, is therefore the only official voice which must not accuse the Prime Minister’s baby nor her partnership, by default. But, of course most of the politicians are lesbophobic and now is the moment for some of them to spit out their hatred. So, position & opposition politicians are accusing her, far right and religious organizations hate her, feminists and lesbians are angry on her, syndicates are angry on her and nevertheless the lesbian family of the Prime Minister is not in connection to these issues – the mysoginic and lesbophobic accusations and hate language come from all sides.

But legal issue is only part of the story of the difficult lesbian everyday lives. What is important is that some discussions are happening in the public about the same sex parenthood for the first time and the average people in the country are hearing facts of life they never imagined existed: Lesbian mothers! It is like a hammer in the head from which they have to defend themselves with intense hatred, or total silence. But, some people are talking… and in these few days we’ve heard what people think about the baby of the Prime Minister, and the answers are absolutely different, we cannot predict who will say baby is a baby we love all children… or who will start the brutal comment which cannot be digested. More so, apart from us few lesbian activists, nobody is using the term ‘lesbian’, it is almost the most hated word in our language (Serbo-Croat-Bosnian-Montenegrin language), not pronounced even by the enemies. The Prime Minister uses the term ‘gay’.

On the other hand, most of those who like to say that sexual orientation is a private issue, I don’t care who is she in bed with, are caught in the cul-de-sac. The child has to go to the kindergarten, to schools, health centers, and other institutions that have strict regulations of the parental rights. And not only this child, but many other children already living in lesbian families in this country. Nothing private there, but thousand obstacles for the other mother. All of what we knew when fifty years ago we feminists said private is political. The lesbian families already in our community are trying hard to invent creative answers how to overcome endless same questions about two moms, or invent impossible acts how to resolve the legal barriers in taking care of their children. We hope that the mere fact of the existence of the privileged lesbian mother in government will help increase positive attitude of the two moms social phenomenon at all. Some of us activists are using this momentum to talk. 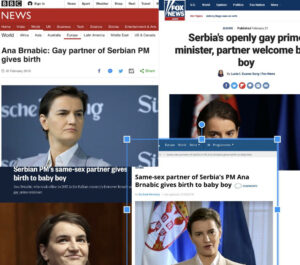 On the other side are lesbians who live in dark silence, in poor communities, in small towns, in Roma settlements, isolated and alone and have all the lesbophobia around and inside themselves to fight every day – some of them are hiddenly smiling in their own privacy searching the internet news on ‘gay premier’, and thinking, At least someone has done it. Others feel cheated for the same reason, that Only privileged some can do it.

To summarize, in this particular situation the fact that Prime Minister is a lesbian and a lesbian mother is fused with the fact that she represents nationalist, corrupted, authoritarian politics. For some of us this means we decide to take in consideration the multiplities of political messages that one political personality represents at the same time. It is not the first time we have discussions among feminists about women in right-wing politics, when the researches showed: the conservative women politicians are still targets of sexual harassment and misogyny. This is exactly what we see now, lesbophobic accusations from left and right politics. We are witnessing again and again that ‘Lesbians are weak subjects’, with very little or no public support. It is precisely why some of us lesbian feminists say out loud that we are glad we have a lesbian mom in the government while we oppose the politics of that government.

TO GO FURTHER
To know more about Lepa Mladjenovic