B – Project
In b-project Maja Radosavljevic, a former studio photographer from Vienna, puts bodies in the centre of her work. By illustrating breasts in different shapes and from different perspectives, Maja points at the ‘most important female* body-parts‘ from a queer feminist stance. Studio and fashion photography, as does society, describes and defines women* by showing their bodies in perfect, acceptable shapes. It creates a ‘photoshop fantasy’, an image almost nobody can achieve. Thus, b-project is not just a call out for (self-)acceptance and for a variety of what is called gender and what is understood as female* body. It is also a queer critique towards photography and our society. 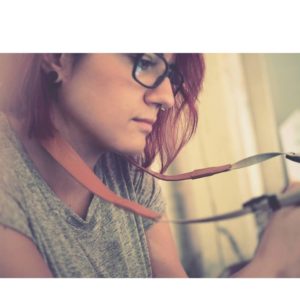 BIO:
Photographer and Visual Artist living in Vienna. 2006 – 2014 she worked as a studio photographer. Beyond Intimicy was her first exhibition in Vienna. Since then Maja added Videography to her artistic expression. She did her Bachelor in Theater-, Movie and Media Studies and Gender Studies this year. She also attended courses at the University of Applied Arts. Since 2014 Maja organizes the International Queer Minorities Film Festival TRANSITION in Vienna. Her work was always shaped by the Criticism of society from a queer feminist point of view.