NO FLAGS, NO ANTHEM: A LESBIAN UTOPIA

All the stories resounded continuously beyond the city. All the stories of the past were gently pulsing in the air like the music of the wind between the leaves of the trees.Here, dykes had chosen to make this country the opposite of a nation : no flags flying on the buildings, pride beating like a heart in the chest was enough. No national anthem that glorifies the powerful, the victorious and leaves others in the shadows. No, all that matters here is the sum of the stories, the singular stories of these women who were once described as fat, scarred, handicapped, fragile, hysterical, boring, angry, radical, too thin, too shy, too sexed up, masculine, feminine, noisy, hairy… too lesbian !
And because one must remember the stigmas so that they never hurt again, the dykes had built the city with history books. 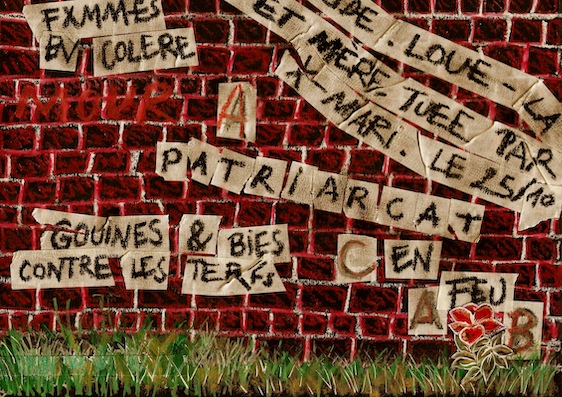 Thus, the centuries-old lesbian stories were everywhere : hanging on trees, in the rivers, in the heart of an apple, etc.

Everywhere, carefully ​carved words, engraved in the stone, rainbow neon lights lit up intermittently to remind spirits, young and old, of the victorious struggles of the past. And in harmony, ​as the words blossomed, ivy and hibiscus had covered all the hate tags. 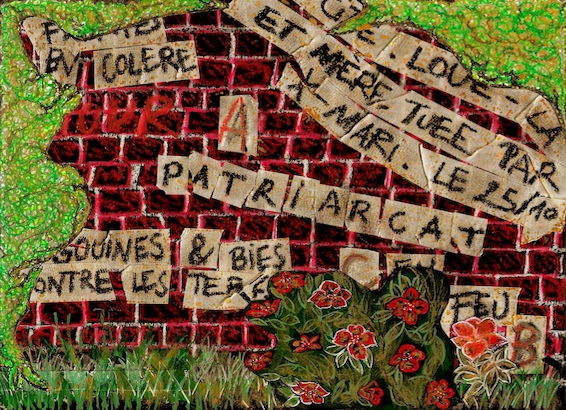 Once a year, as the oceans turned blood red, the dykes abandoned their activities to gather under the moon. They then make a big fire and for days and nights, gather around it, the bodies become lights, torches, glittering fireflies; they remember with an emotional joy, all the lives lost in battle, the sound of chains, the cries, the scratches, the wounds, the betrayals, the pain, the sadness…. 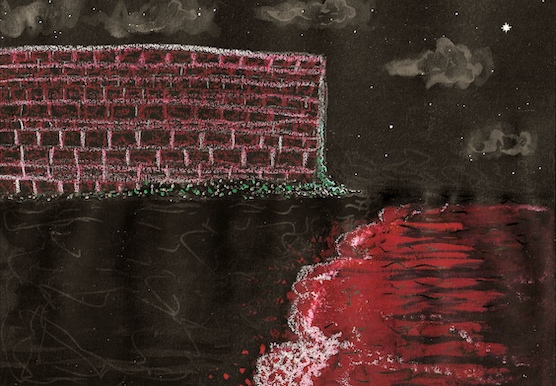 For 3 days and 3 nights, they spoke the names of all those who had fought long and lost much before the Great Lightning. Then, everynight, the oldest hand of the city picks 2 names, 2 lesbians who have the mission to tell in turn without stopping, their story or the story of their family.

My name is Sanza which means “Season”. My grandmother named me that way so that I don’t forget that my black skin is not a costume, it doesn’t fall like leaves in autumn, it can’t be confused with the one that burns under the summer sun. I am not black by choice, by envy, by mood…

To be black is not a cape, not a garment that one wears during a demonstration.

It’s not a profile picture, it’s not the new fashion trend, it’s not next spring’s color, it’s not a usurpation, it’s not a penchant, it’s not a complaint nor a nightmare that prevents you from sleeping peacefully. It’s me, just me, Sanza. 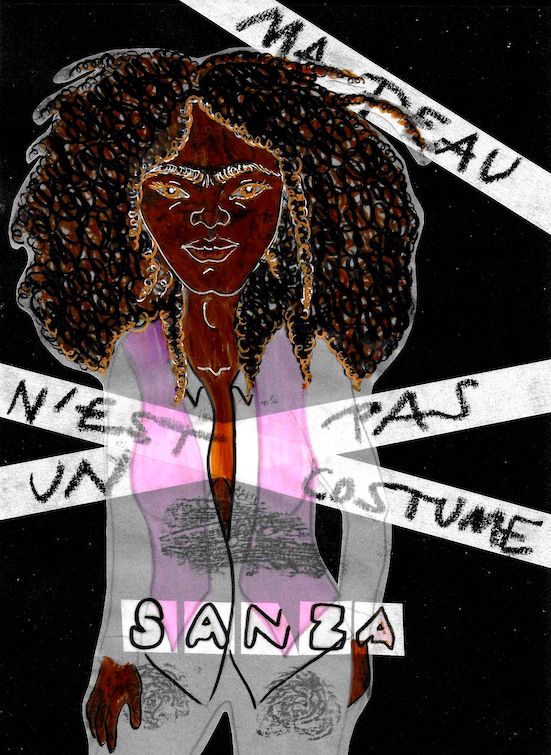 Before the Great Lightning, we heard all kinds of things, in addition to the violence in a man’s world an​d the beatings and injustices, we had to stand up to the winds of prejudice even in our communities.

We were told: “We are all the same. To be a lesbian is not the same…and after all, are we not all lesbian ? One can be a little bit lesbian once in a while”.

I would answer: “I don’t know if we are the same or even if “being a lesbian” is declared, is chosen with a snap of the fingers, what is certain is that if it is a choice, it is always a struggle, a resignation, a renunciation of the quietness of family, friends, work, society as a whole. Everything always has to be redone. To be rebuilt. To be reconstructed. Always and inevitably, even within feminism and even between the lines of good resolutions for equality”.

We were told: “You are cute, so pretty, but being a lesbian, what an idea, what a waste for the world ! »

I would an​swer, “What world is this? The o​ne where we have to fight for our freedoms? The one where we have to debate for an inch of independence? Working twice, three times more without almost any recognition? Walking the corridors, brightening up meetings, proving, debating almost begging for a few pennies ? »

We were told: “You complain all the time, you underline your differences, it’s normal that you are on the margins, a minority within the minority”.

So I stopped answering and joined the Dyke Force.

Around the fire, the women had greeted Sanza’s story with laughter, applause and youh-youh of all kinds. Then another woman took the floor. 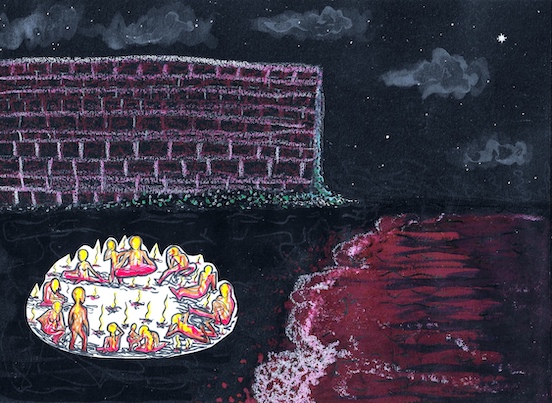 My name is Noura. Light. I was born at night under a roof glittering with stars. One more dyke in a city between mountains and sea. Before the Great Lightning, I lived in search of the limit, in search of a happiness different from the one served in a kit or a can. With my imperfect body, my head in a storm, and with my desires in complete disorder. 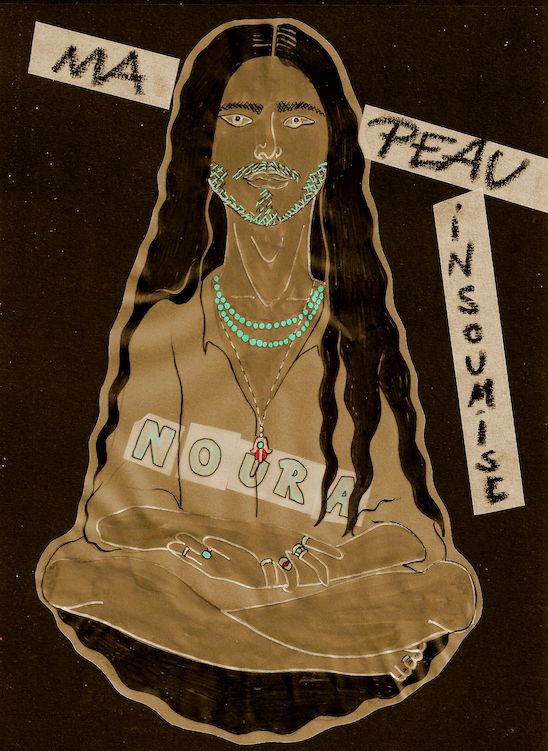 I have cherished each of my cravings, with the proud vanity of the oppressed. To ransack everything, to burn everything and to watch the last letters of the patriarchy burn with a pyromaniac appeasement. This is what my life was like before the Great Lightning.

Before living with you in this city.

Then came the night when I caught desire in the apple of blue, green, brown and black eyes.. A mischievous hip, a lost hand, a murderous smile and the evils that predicted a future made of sweet lips.

One night. Thousands of nights. Her body against mine. Bodies by the thousands, deformed, out of the norm. Bodies that squeeze together with pleasure, a zipper, a hand, fingers that find, a neck, chewed lips. A breast, a fall, a shoulder, blood flowing in. Temples beating to the rhythm of the pleasure that rises from the lower back, the hollow of the kidneys. Time stands still. The creaking of two bodies, a thousand bodies lost in sweat, thousand bodies that don’t give a damn about the world. Spread apart, suspended, skins subtracted from the eyes of men. Our lives that explode in kisses that bless the goddess cyprine.

At the time, every day, we heard some people say: “You are too provocative! Live hidden if you don’t want people to look at you with lustful eyes! »

Every day we would hear: “Your embraces disgust us, they disturb the natural order of things”.

So I joined, we joined the Dyke force and we loved each other more and more. 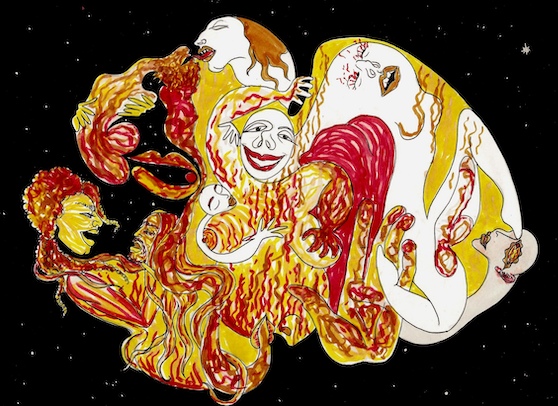 On the 3rd evening, in the city with no flags, no anthem, on that night of fire, the lesbians got up. They danced as close as possible to one another and sang every word hanging on trees, in the rivers, in the heart of an apple, etc.

Happy to live in a world that has finally changed.

There/ is our radicality, in our lesbian bodies, imperfect body with its darkness, its incapacities, with its wrinkles and stretch marks. With its impulses, its beauty, its radiance and its extraordinary banality.
Our revolutions lie in our loves, our sexualities. In the political and assumed hedonism.

This is our utopia: to enjoy, enjoy and enjoy endlessly and to populate the world with our stories.