Resistance as a Way of Living: Lesbian Lives through the COVID-19 Pandemic

In March 2020, in a context of insecurity and fear linked to the COVID-19 pandemic spreading globally including in Europe and Central Asia, EL*C decided to react by organising an online space for lesbians to exchange information on the ongoing situation and its many repercussions. This online space, coined ‘LLL – Locked-down Lesbians Listening’, was open seven days per week for several months and moderated in a number of languages to accommodate as many lesbians as possible. 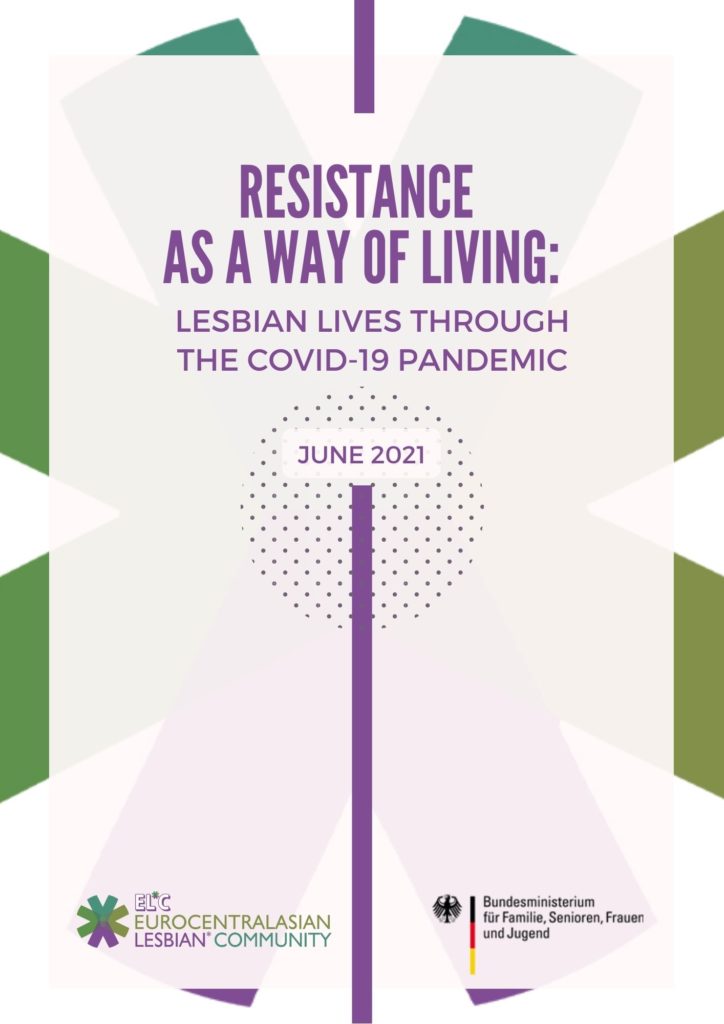 Additonally, throughout all of 2020, we continued receiving information and feedback from our network and it became increasingly clear that the crisis would have severe consequences on lesbian groups across Europe and Central Asia, especially taking into account the overwhelming evidence that the lesbian movement is severly underfunded. For this reason, EL*C developed its own COVID-19 Emergency Grants Program, with the aim to help lesbian groups cope with the pandemic. Within this activity, we have been providing small grants to lesbian organizations that were in urgent need of financial support, especially those that are working directly with supporting the community with immediate needs, such as food, medicines, psychological support, shelter, support to elderly lesbians, lesbian refugees, etc. For this purpose, EL*C has launched 2 cycles of grant applications with the available funding of 60,000.00 EUR, out of which 30,000.00 EUR have already been distributed to 12 lesbian groups from Austria, France, Spain, Serbia, Russia, Georgia, Turkey and Kyrgyzstan, while we have received over 50 applications. The remaining amount will be distributed to lesbian groups in the second half of 2021.

Thanks to the LLL sessions and the additional information received by the community, we realised that very little information was available on the specific struggles within the lesbian communities and how those communities were coping with the collective trauma of the COVID-19 pandemic. The conversations happening during the ‘LLL’ sessions concerning the impact of COVID-19 on lesbian communties across our regions convinced us of the need for a more general and exhaustive evaluation. The first stage of our evaluation process was  based on desktop research and data collection and already preliminarily highlighted the disproportionate effects of the pandemic on women and the LGBTIQ community as a whole. Unfortunately, most of the studies that we came across did  not take into account thoroughly the combinations of factors such as gender and sexual orientation in the experiences linked with the pandemic. However, the stories of violence perpetrated by unsupportive families against lesbians, the episodes of discrimination based on both gender and  sexual orientation as well as the increase of lesbophobic rhetoric and statements that we have been registering since the beginning of the pandemic demonstrated the need to specifically consider  the experience of women in the LGBTIQ community.

Based on these initial findings (or lack thereof), we decided to launch two online surveys, one  aiming to assess the impact of the situation on lesbian individuals and the other focusing on lesbian organisations and groups in our region. The surveys were available in eight different languages (Spanish, French, English, German, Italian, Russian, Turkish and Serbian). Between December 2020 and March 2021, while several countries within our scope were facing  second and third waves of COVID-19, we collected 2113 answers from individuals and 134 organisations and groups in Europe and Central Asia. A detailed analysis of the methodology followed by the collection and analysis of this data is available below.

As detailed in Chapter 1, the survey aimed to collect data from individuals on issues related to safety, employment and income for lesbians as well as the experience of discrimination and the consequence of the situation on the respondents mental well-being. An alarmingly high rate of respondents reported increased feelings of insecurity in the public space, instances of violence perpetrated by unsupportive family members, and the recurrence  of lesbophobic discourses and rhetoric. This withstands and illustrates previous accounts on how the pandemic had worsened the incidence of violence against women in general, and against lesbians in particular. In addition, the results confirm that lesbians, as a minority group, experienced a stronger economic shock. The long-term damage caused by the socio-economic consequences of the pandemic should be carefully evaluated. Moreover, measures related to social distancing, such as drastic reductions in people’s freedom of  movement and social contacts, posed additional problems to lesbians especially when their relationship(s) and families were not legally recognised in their country. Finally, the data also speaks to the heavy toll on lesbians’ mental health as well as the numerous ways in which lesbians stayed active in their community, organised themselves to stay in contact with each other and provide support to the most precarious within their communities.

The data collected regarding individuals also allows for a specific focus and elucidates the areas in which factors related to intersectionality (such age, race, ethnic minority, refugee/asylum seeking status, disability or gender identity) determine significant difference in the experiences of the pandemic. While the report does not aim to offer a complete analysis of the intersectional oppressions faced by lesbians,  our community, and their impact on the experience of the pandemic, it focuses on the areas in which statistically significant differences could be found from our pool of respondents (more details on methodology and the demographic are available below).

Chapter 2 of this report is devoted to lesbian organisations and groups, whose aswers to the survey show that the lesbian community has, in a very short amount of time, re-organised to provide for the direct needs (such as food and housing) of members of the community in need and to offer support services to deal with the most vulnerable within their communities. This has been done thanks to the generosity of community members and due to extensive  experience in dealing with crises that the lesbian movement has accumulated throughout  decades of leadership in the LGBTIQ and feminist movements. However, the results also show that the chronic lack of funding and resources for lesbian-led and lesbian-focused projects, initiatives and organising has worsened, as a result of the pandemic. This poses a serious risk to the capacity of the movement to continue offering its indispensable support services and to fully respond to the rise of hateful rhetoric and lesbophobic violence in Europe, Central Asia and beyond.

The COVID-19 pandemic has been a global shock whose long-term effects are yet to fully emerge. They are, however, predictable and, as this report already shows,  will inevitably intensify  the existing system of oppression. Lesbians, living at the crossroads of multiple societal issues such as gender inequalities and social stigma related to non-conforming sexual orientations, offer practical experience and examples of  the skills needed, as a society, for survival in this crisis and its aftermath. For this reason, the present report wants to not only offer recommendations to policy-makers, institutions and donors on the specific inclusions of lesbians in policies aimed at addressing the COVID-19 crisis, but also to make visible a lesbian perspective on the present crisis. As EL*C did at the beginning of the pandemic, those in power at global, regional and national level have the opportunity to listen to the lived realities of lesbians as well as to the experiences of the lesbian movement to build a recovery that is fully inclusive of everyone’s needs and experiences in our societies and to construct healing processes that are truly revolutionary.