There continues to be a persistent lack of attention given to the needs and priorities of LBQ women and gender non-conforming (GNC) people, both in philanthropy and within the LGBTQI and women’s rights communities. 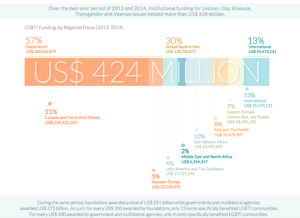 Of the $424 million for international LGBTI issues in the two-year period of 2013-2014, only $9.5 million (2%) targeted lesbians, bisexual women, and queer women. Furthermore, lesbian and queer women in Europe tend to be strong leaders and members of LGBTQI, women’s rights, and other social justice movements and have produced many success stories – while the particular “LBQ” concerns tend to get pushed into the background. This plenary panel will include reflections from recent and ongoing research and observations about the movements’ funding level, gaps and needs.