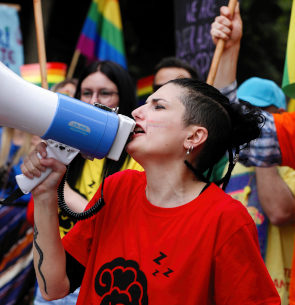 Xheni Karaj was born in Tirana, Albania. She has a bachelor’s degree in psychology awarded from the Faculty of Social Sciences at the University of Tirana. On February 2009, at the young age of 21, together with a small group of friends, Xheni decided to open a Facebook group called The Straight and Gay Alliance Against Discrimination of LGBT People in Albania. In 2014 Xheni together with her close friend Kristi Pinderi one of the main LGBT activists in Albania, opened the first LGBT shelter for homeless young people.