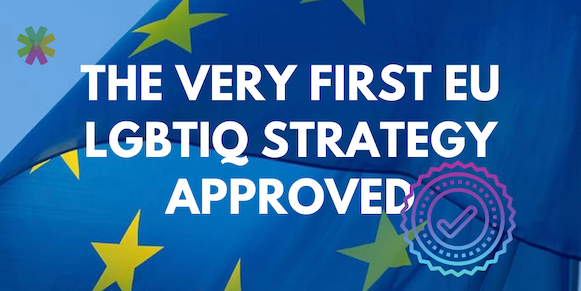 Today is an historical moment for the rights of LGBTIQ persons in Europe, and beyond. For the very first time, the European Union launches an LGBTIQ Strategy for 2020-2025. And, the very good news is: lesbians were not overlooked.

This LGBTIQ Strategy sets out a series of targeted actions across four pillars: Tackling discrimination against LGBTIQ people; Ensuring LGBTIQ people’s safety; Building LGBTIQ inclusive societies; and Leading the call for LGBTIQ equality around the world.

In Europe, 57% of lesbians have been harassed in the past five years (according to the 2019 European Fundamental Rights Agency Survey). For years, EL*C has been asking national and international institutions to act. For the first time, this new LGBTIQ Strategy is calling for specific actions to tackle simultaneously gender-based discrimination and violence, as well as the prejudice and violence experienced by LBTI women on the basis of their sexual orientation and gender identity. We thus commend the recognition of the intersectionality and the multiple oppressions faced by lesbians, and the need for specific actions towards socio-economic empowerment, access to health services and funding opportunities for lesbians.

The murder of a 28 year old lesbian in Italy (Elisa Pomarelli killed in 2019), the lesbian couple attacked in Amsterdam (August 2019), the lesbophobic attack at the hearth of Brussels’ European neighbourhood (in September this year ), but also the police violence committed by Polish authorities against LBTI women as well as the massive wave of lesbophobia on the French social media in the past weeks following the publication of a book on lesbians, are as many examples of the level of hate speech and hate crimes targetting lesbians, that need to be adressed far more actively by the institutions. Outside of the EU, the attacks against the EuroCentralAsian Lesbian* Conference held in Ukraine in April 2019 and the recent arrest of a lesbian activist in Belarus (Vika Bran) call for concerted efforts among international institutions working on human rights and the rule of the law, and require a strong and unequivocal political stance to counter these alarming trends.

We welcome the EU LGBTIQ Strategy 2020-2025 as a milestone, opening new avenues of cooperation between civil society and the European institutions, and we will ensure that the promises of the strategy do not remain vain, but are materialized into concrete measures for lesbians.