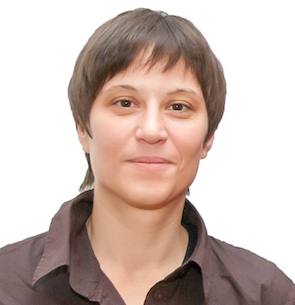 Olena Semenova is a Ukrainian born LGBTQI human rights activist and a Doctor of Medicine. She has over 20 years of experience in the fields of human rights activism, STI prevention and health services for LGBTQ, and advocacy for LGBTQI freedoms.
Since 1996, Olena has been involved in the LGBT movement. First as a journalist and an editor of the first Ukrainian gay magazine “One of Us”, then as an activist, member, and employee of several LGBTQ nonprofit organizations. Olena is a founding member of several LGBTQ nonprofits, festivals, events, and initiatives in different regions of Ukraine, including the capital pride initiative KyivPride. She is a member of the Council of LGBT Organizations of Ukraine and
was a part of the National expert group on LGBT of Ukraine for years. Since 2015 Olena has been a Co-Chair, of the oldest Ukrainian LGBT organization, the LGBT Association “LIGA” that has, for the past 20 years, been working for equal rights for LGBT people in Ukraine. LIGA has offices and community centers in 4 cities throughout the country and operates a Resource Center for young activists, initiative groups and specialists all over the state.
Promoting human rights for LGBTQI people in Ukraine and globally, Olena became a part of the international initiative MunichKyivQueer Contact Group and a founding member of KyivPride Canada. Today Olena also represents the international community sitting on the Advisory Board of the Canadian nonprofit Dignity Network, the Equal Rights Coalition civil society network and on ILGA`s intersectional committee.