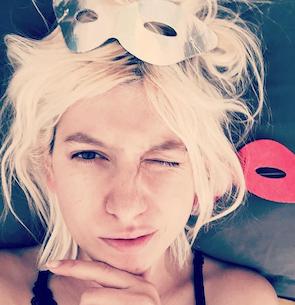 Apart from her editor career, she was carrying out Queer Theory lectures in Gender and Women’s Studies Master’s Program for 4 years at Ankara University. She has also been the coordinator of Feminist Forum for four years which gathers together prominent feminists and LGBTI+ activists around the world in Ankara. Additionally, Demir is a jury member of Women to Women Story Contest organized since 2006 in order to encourage women writers to write about their lesbian – bisexual stories.

She has made presentations, community building activities in over 100 workshops and conferences on LGBTI+ activism together with activists and professionals such as teachers, health care workers, lawyers, religion worker in 50 different cities in Turkey, Nepal, South Africa, Sweden, Switzerland, Hungary, Serbia, Germany, Austria, Holland and Italy for approximately 8 years.

She was one of the two editors of “Öteki Olarak Ölmek” (Dying as Other) book in which we thought the violence of state in the funerals of groups which have the
experience of otherness (Kurds, Alevis, Armenians, Greeks and LGBTI+s) and intervention made to their body into question.

She was one of the curators of exhibition in which from Turkey and abroad 17 artists’ works in total were exhibited with the theme of Future Queer in 2015 and 2016. Last year, she curated an exhibition called “Colony” in İstanbul and Berlin.

She is also one of the curators of Read My World Literature Festival 2018 edition in Amsterdam.

(Re)claiming our lesbian bodies and spaces: Safety and Security