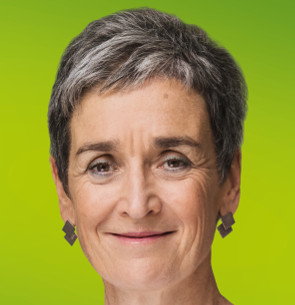 Ulrike Lunacek is currently Vice President of the European Parliament; she has been MEP (Greens/EFA) since 2009, EP-Rapporteur for Kosovo, Co-President of the LGBTI Intergroup of the EP; she is also a Member of the Committees on Foreign Affairs and on Civil Liberties, Justice and Home Affairs. Front-runner Austrian Green Party for National elections 2017

As Vice President of the European Parliament she is among other topics in charge of the Sakharov Prize Network and the European Eco-Management and Audit Scheme (EMAS).

Lunacek was born in Krems, Lower Austria on May 26th, 1957. She went to high school in Vienna and spent one school year as an exchange student in the USA with AFS. She studied English-Spanish-German for the interpreter’s degree at the University of Innsbruck, where she graduated with Mag.a Phil. (M.A.) in 1983.

From 1999 to 2009 she was Green MP and the Austrian Greens’ Spokesperson on Foreign Affairs and Development Issues as well as on Equality for Lesbians, Gays, Transgender Persons.