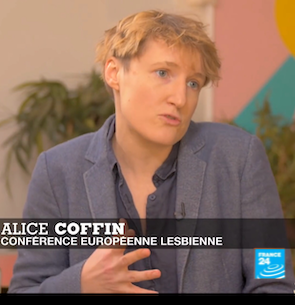 Alice Coffin, 40, is a journalist and lesbian activist. Her field of expertise is the study of media coverage of LGBTI issues.

As a mainstream journalist specialised in media studies, a journalism teacher, and a leader of LGBTI activism in France, Alice Coffin is an influencer on Twitter with a certified account of 15,000 followers dedicated to LGBTI and media issues.

She also has a blog on those issues alicecoffin.wordpress.com

She founded the Association of LGBT Journalists, which she chaired during two years and launched the very first French LGBT visibility Awards, les OUT d’Or, which had a great impact in the country.

She is a cofounder and key actor of several LGBT and feminist groups in France and in Europe (Lesbiennes d’Intérêt Général, La Barbe, French Women association of journalists, European Lesbian Conference). She helped all those NGOs and others to understand how to better use the media.

On the other hand as a major French journalist on LGBTI issues, she also educated her fellow journalists to better cover those topics.

In 2018, she was granted a Fulbright Fellowship as a NGO leader for a 6 month study in the US on how the media cover LGBTs.

She was in charge for ten years of the media beat in France’s most read newspaper.

She has been called as a media expert on LGBT topics in several international groups.

She is quoted on daily bases in the French public sphere on LGBTI issues.
Co Founder of European Lesbian* Conference and Co-President of the French Association of LGBT Journalists (AJL). Lesbian and feminist activist at La Barbe and other groups.

The future in patriarchy and capitalism is bleak. In a world which was never built for us, not even to marginally accommodate us, in a world where our loves, desires and mere existences make us pirates of the cis-heteronormative imperative, what does it mean to harness our own destinies and hack the future? From artificial […]

We are out, we are loud, we are visible! As part of the @European Lesbian* Conference from 29 Sept – 1 Oct, our Dyke March will take place. Lesbians are not sufficiently represented in society, nor in the LGBTQI+ community – we want to change that! *Everyone is welcome to support* ✦ Bring your whistles, […]

As we organise and shape our movement, we luckily have a lot of expertise and skills to draw from. Be it for the much-needed data collection on our lives and experiences, the unveiling of our realities, struggles and loves through art, or the carving of space in the political arena, and pushing of our voices […]

Which place for lesbian journalists and dyke stories in this machomedia world?

Journalism and representations: lesbianize the media!